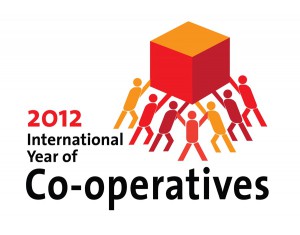 WHEREAS, The United Nations General Assembly Resolution 64/136 on co-operatives in social development proclaims the year 2012 as the International Year of Co-operatives (IYC);

WHEREAS, The theme of the International Year is “Co-operative Enterprises Build a Better World”;

WHEREAS, The Resolution recognizes that “co-operatives, in their various forms, promote the fullest possible participation in the economic and social development of all people, including women, youth, older persons, persons with disabilities and indigenous peoples, are becoming a major factor of economic and social development and contribute to the eradication of poverty”;

WHEREAS, The Resolution encourages all relevant stakeholders to take advantage of the IYC to promote cooperatives, to raise public awareness of the contribution of cooperatives to social and economic development and to promote the formation and growth of co- operatives;

WHEREAS, More than 29,000 co-operatives operate across the United States’ economy, finding a broad range of expression in areas including food, agriculture, forestry, fisheries, energy, employment, finance, housing, healthcare and the arts;

WHEREAS, U.S. co-operatives generate 2 million jobs, make a substantial contribution to the U.S. economy with annual sales of $652 billion and possessing assets of $3 trillion;

WHEREAS, Our region has a rich history and tradition of co-operative enterprise that encompasses a wide range of sectors and industries; and

WHEREAS, The Valley Co-operative Business Association (VCBA) seeks to assist, support and promote co-operatives and their members in our region. Now, therefore, be it

RESOLVED, That the Valley Co-operative Business Association commits to:

1. Join with NCBA and co-operatives and organizations in supporting and celebrating the year 2012 as the International Year of Co-operatives;

2. Recognize the vital role co-operatives play in the economic and social well-being of people in our region, our nation and the world;

3. Celebrate the year by engaging in efforts to raise the profile of co-operatives and demonstrate how co-ops build local wealth, generate employment, provide competition in the marketplace and how membership in co-operatives empowers people; and

4. Lead efforts to engage the co-operative community in our region in promotion of International Year of Co-operatives activities.

Adopted by the VCBA Board of Directors, 19th September 2011