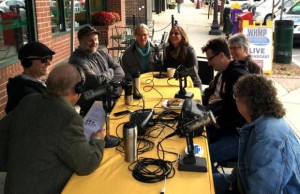 VCBA, NFCA, VAWC and other co-ops on the air during the Annual Bill Newman Co-op Roundtable on WHMP.

Our valley is already home to a vibrant community of co-operative enterprises. Though our co-ops can have different structures – whether they be worker co-ops like Collective Copies or Pedal People, consumer co-ops like Franklin Community Co-op or Freedom Credit Union, or producer co-ops like Our Family Farms – we have much in common.

Co-ops share a common history, identity and set of principles. In 1844, during England’s 19th century rapid industrialization, 28 weavers and community activists established a new kind of business based on open membership, self-responsibility, shared ownership and the meeting of human needs. Members pooled capital to order soap and tea, cutting out the ‘middle-man’, saving money and gaining control their economic well being. A store was opened later that year with farmer and worker co-ops providing more good for members to take control of new aspects of their economic destiny. These principles set forth by the “Rochdale Society of Equitable Pioneers” formed the basis of today’s co-operative movement, which includes a billion members worldwide and more than 29,000 co-ops here in the United States (www.ica.coop). The energy and inspiration of these early co-operators lives on today in UK’s Co-operative Group, one of the largest co-ops in the world (www.co-operativegroup.coop).

VCBA sees our common history and principles as a framework for co-operatives to work together. The International Year of Co-operatives is an unprecedented opportunity to educate about our model and the benefits it creates in our communities. How can we build on the success of current co-ops and identify new opportunities for co-operative enterprise? How can we best promote co-ops’ sustainably rooting capital and employment in our communities? Other regions of the world such as the UK, the Basque region of Spain and the Emilia Romagna region of Italy provide examples of how co-ops, both in and across sectors, can work together. These regions provide examples for us, but how can we pool resources, just as in England 150 years ago, to support existing co-ops and build new ones?

Co-operatives exist for people to work together to enrich and improve their lives and their communities. Co-ops have been resilient in the current recession, preserving jobs, economic infrastructure and community wealth. Using the co-operative model people can share resources to gain greater access and control over food, finances and housing. Co-ops secure employment, build community and market products being guided by our shared principles, allowing members to live according to their values.

VCBA Founding Board of Directors